Ben, January 16, 2014
We left Doha on Wednesday afternoon to fly to Israel. Since most countries in the region have no diplomatic relations with Israel, we had to fly through Amman, Jordan. Prior to the trip, we were somewhat apprehensive about going through immigration in Israel, especially with stamps in our passport from the gulf countries, but thankfully we had no issues at all. We arrived in Tel Aviv fairly late, so we took a cab to our hotel and called it a night.

The next morning, we walked all through Tel Aviv. We started by walking down the pedestrian path on the waterfront to Jaffa, which houses the old part of town. This area is also supposedly the location where Jonah was prior to being swallowed by a large fish. We wandered through a flea market and then back up through town. We walked through a large outdoor market that sold food, spices, and clothing that Pam loved, and then made our way north toward the Tel Aviv port. We had lunch at a restaurant on the beach, and then meandered a bit more and back toward our hotel. From there, we grabbed our bags and headed to the bus station to catch the bus to Jerusalem.

We arrived in Jerusalem in the late afternoon and decided to walk down to the Old City. The walls that surround the Old City were amazing and impressive. Inside, the Old City is also a sight to behold -- I've never experienced a city like it. The buildings are very close together and at times you're wandering through tunnels. The "roads" are really just paths/steps that also have small ramps for pushing wheeled carts up and down. This description absolutely does not do it justice, and it's very hard to describe. European cities frequently felt old to me, but this place felt more like a different time and place, if not a different world. 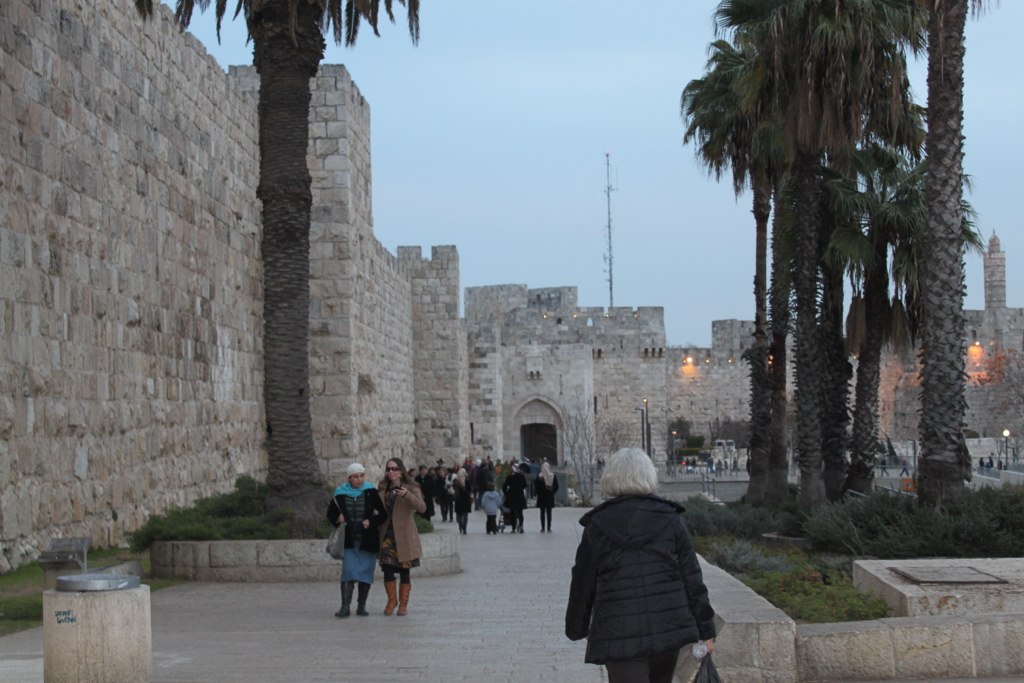 Walls of the Old City 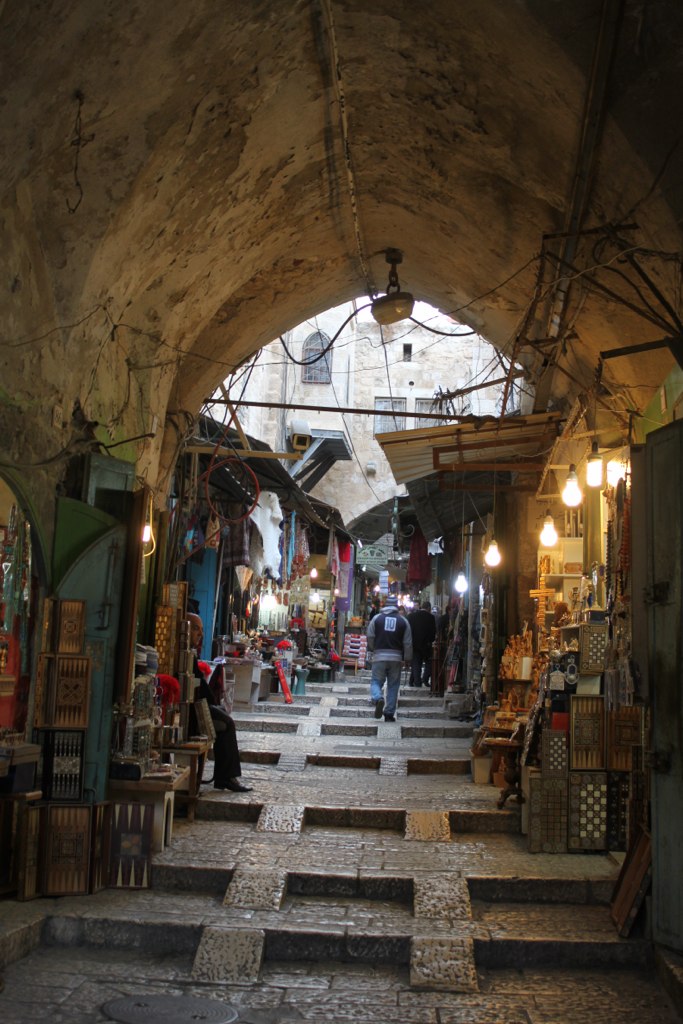 Inside the Old City

Eventually, we ended up at the Western Wall. For anyone who doesn't know, the Wall is the last remaining part of the temple built in Jerusalem by Solomon and expanded by Herod. The temple is considered the last known location of the Ark of the Covenant (which held the tablets with the 10 commandments). It is considered one of the holiest places on earth and you can find many people there praying. For someone who considers most of the Bible as less than factual, it was cool to see a piece of still existing history that is a part of many biblical stories. After seeing the wall, we grabbed street food for dinner and then headed back to the hotel.

The next morning, we had a not-so-bright and early wakeup at 3:30am for a sunrise tour of Masada. Masada is a mountaintop fortress that also dates back to the time of Herod and is famous as the location of the last stand of Jewish zealots who were fighting the Romans before ultimately committing mass suicide. We hiked the mountain for what is supposedly an incredible sunrise view over the Dead Sea, but the day was cloudy and we saw no sun. Despite missing the sunrise, the ruins on the top of the mountain were awesome to see and well worth the hike on their own.

Next stop on the tour was Ein Gedi, a desert oasis that contains a number of waterfalls. It is known as the place where David went to hide from King Saul. We did some more hiking there and had a light lunch before hopping back into the tour van to head to the Dead Sea. At the Dead Sea, it was only about 60 degrees, but we decided to brave it and get into the water anyway. Due to the high salinity of the water in the Dead Sea, you naturally and effortlessly float. The mud on the bottom is also supposedly very good for your skin, so everyone rubs the mud all over their body. Overall, it was very cool to experience and the water turned out to not be all that cold.

We hopped back on the tour bus and headed back to Jerusalem. The route back took us through part of the West Bank, which surprised me a bit, but we learned that parts of the West Bank are openly accessible to Israelis. After a quick pit stop at the hotel, we headed back down to the Old City. Once there, we headed to the Church of the Holy Sepulchre, which is revered (but disputed) as the location of the crucifixion and burial of Jesus. The church was beautiful and rivaled almost any church or cathedral that I've been to, save St. Peter's.

While we had seen the West Wall on the previous day, we had not yet seen the Dome of the Rock or the Al Aqsa mosque. I was upset to find that the Temple Mount (the area above the West Wall, where the actual Temple existed and where the Dome of the Rock and the Al Aqsa mosque are today) is closed to tourists on Fridays and Saturdays. Despite this, Pam and I were able to wander a bit into what may have been private residential property, but we got some great views that overlooked the Wall, the Dome, and the Mosque. 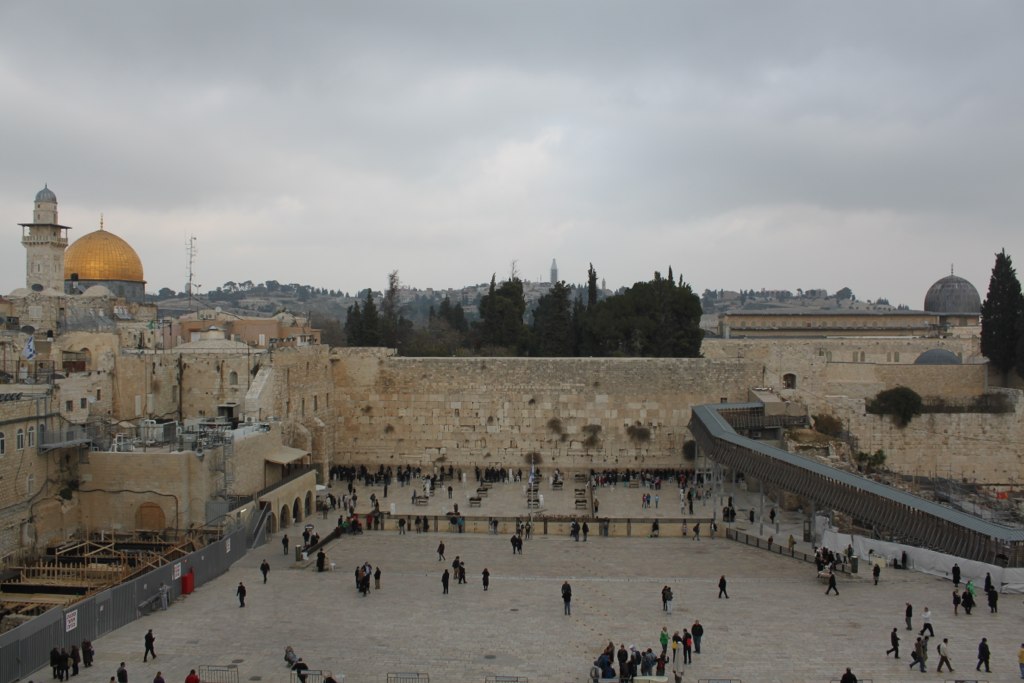 The Dome of the Rock, The Western Wall, and Al Aqsa


Finally, we headed back toward the hotel one last time, where we found that the streets had been abandoned and the shops & restaurants closed up for Sabbath. While I was disappointed that our timing prevented us from visiting the Temple Mount, it was cool to see Jerusalem during the Sabbath. When we walked into the Old City, the rest of Jerusalem was still bustling and busy. When we walked out, it was a ghost town. Pretty cool to see.

With that, we started our long journey home. My last major takeaway from the trip is that despite differences and complexities, most people are ultimately the same, just trying to have a decent life and to provide a better one to their children. Our media talks so much about the conflicts between people in the Middle East, but we noticed so many similarities in the people we met -- pretty much all good ones. You can find rude people in every country in the world, and you can find friendly ones too. Lumping people together because they happen to live in a particular country or follow a particular religion is not only worthless, it's probably irresponsible too. It's hard to remember that in day to day encounters, but trying to do so seems like an unequivocally good thing to do.