Ben, January 11, 2014
We arrived in Doha on Saturday, January 4. We were met at the airport by some of Lara's extended family and went directly to her aunt and uncle's house where they had prepared a welcome meal for us. After stuffing ourselves at dinner, we relaxed at the house for a while before heading to our hotel to turn in early, given that we only had about 16 hours of sleep over the previous 4 days.

The next morning we headed to Souk Waqif, a traditional marketplace that sold clothes, spices, and souvenirs. We wandered around the Souk for a while and bought a hookah to bring home with us. After the Souk, we headed to the W hotel for lunch with Sean and Lara. After lunch, they went to the airport to pick up Sean's brother, Eric, while Pam and I stopped at yet another mall to pick up a local sim card for our phone (travel pro-tip: if you have an old, off-contract phone, carriers will unlock it for you and you can take it to other countries and buy a pre-paid sim card to get internet access). A bit later, they picked us up again and we headed to Katara, a cultural village area, where we had Lebanese food for dinner. We closed out the night with a couple of drinks at Trader Vics.

The next morning, Sean, Eric and I went to play golf at the Doha Golf Club, where they were preparing for an upcoming PGA tour event. The course was extremely nice, and I hit the ball like I hadn't played golf in 6 months (I hadn't). While we golfed, Pam and Lara went for massages. That night, we had an early dinner (or lunch, as the locals call it) at an Indian restaurant and then went to a hookah bar to smoke shisha (flavored tobacco). Lastly, Lara's cousin Dana took us to the local waterfront hangout, which looked a little (read: very) ghetto, for karak, a sweet, milky tea.

The next day we spent out in the desert, where we rode camels and had a guide drive us through the dunes in his 4x4. He took us on some wild rides up and down the dunes. He called it the "safe" version of the tour, but I think that Pam still lost a few years off of her life. We had planned to ride ATV's as well, but we called that off due to heavy winds. We made a couple stops on the tour, including one with a view over the border into Saudi Arabia. This video gives you a decent idea of the ride:

After the desert, we were again treated to dinner at Lara's aunt and uncle's house, where we had a traditional Qatari meal of chicken and rice. Apparently Qatari food has a lot of Indian influences. After dinner, we went back to the Souk.  Pam had planned to buy one of the decorative plates there, but eventually decided against it. However, a bit later we discovered that Lara's cousin Dana had gotten it for us as a gift, once again overwhelming us with the amount of generosity and hospitality that we encountered during the trip. We had a night cap at the Four Seasons (all the bars in the country are in foreign hotels, since normal restaurants are not allowed to serve alcohol) before turning in for the night.


The next morning was our last in Doha. We started with a quick boat ride on a dhow for some great views of the city skyline. We then visited the Pearl, a manmade island development, before heading to the airport to catch our flight to Israel. 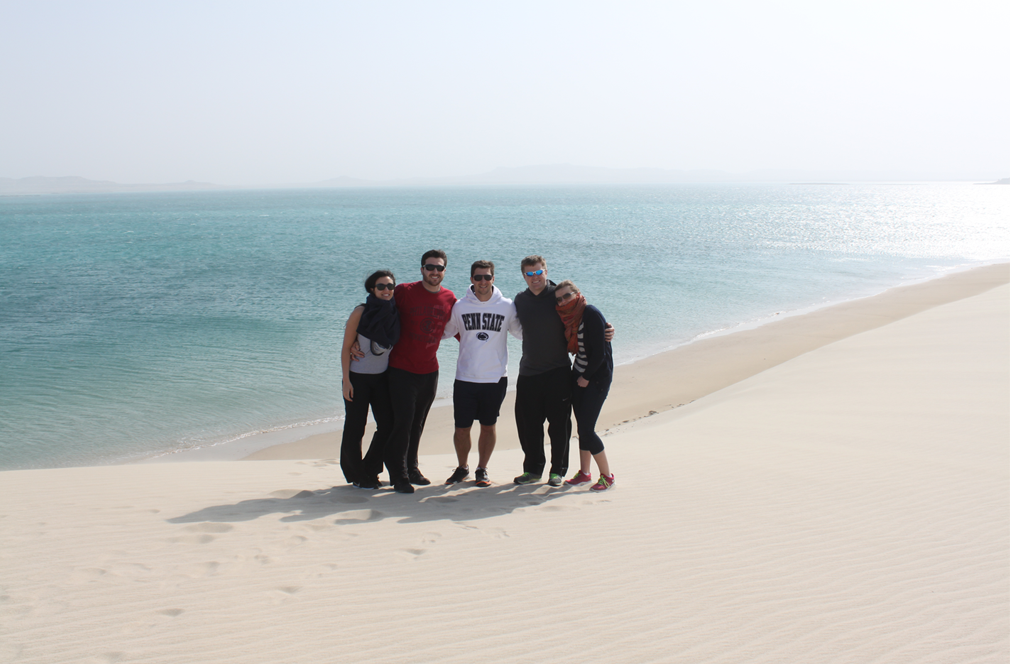 At the Dunes, Saudi Arabia in the background 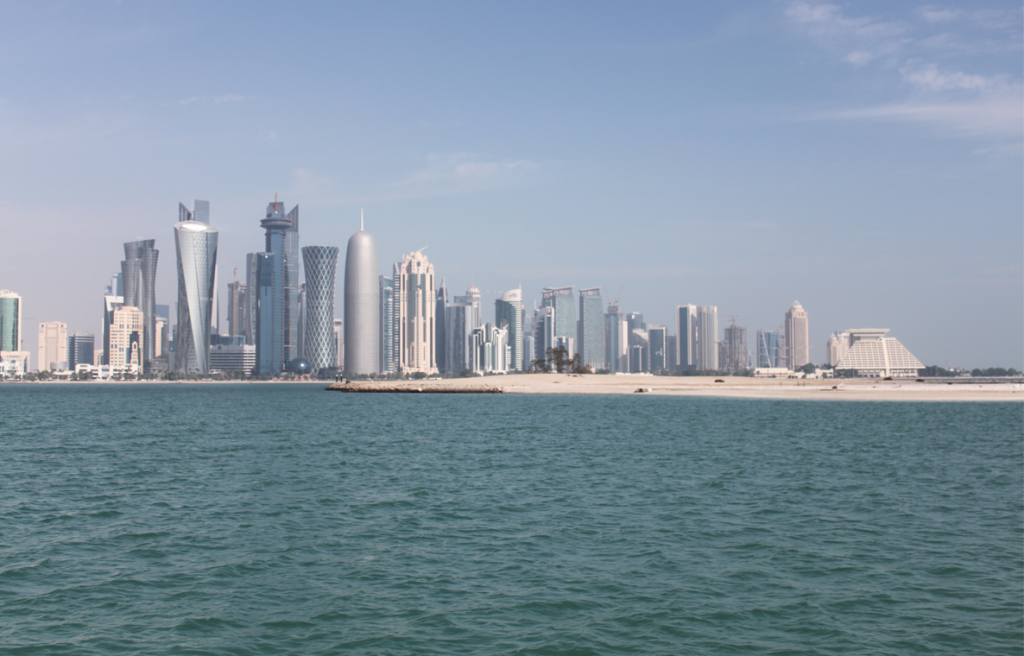 Over the course of this trip, the thing I've enjoyed most is talking to people and hearing their opinions and perspectives on various issues. We've talked a good amount about American involvement in the Middle East, the various conflicts in the area, and the general direction of countries in the region. One major thing that struck me is the inherent bias that our expectations seem to have toward maintenance of the status quo. I'm not sure why yet, but we all seem to have an inherent naiveté regarding the potential for (or even inevitability of) change. For example, 15-20 years ago, people in America would probably have had a hard time imagining the legalization of gay marriage, at least on any sort of reasonably short time horizon. Now, states are (thankfully) doing just that. Same story with marijuana legalization. I feel like we've run into a lot of similar issues on the trip. No one seems to expect legalization of alcohol in normal restaurants any time soon, but alcohol consumption has already come to the foreign hotel chains and Qatar is creating specialized zones where alcohol is allowed for the World Cup. Is that part of an inevitable march towards relaxing of other restrictions? I'm not sure, and the presence of theistic governments makes it difficult to predict, but it will be an interesting trajectory to watch.
Tweet
comments powered by Disqus