Ben, January 8, 2014
Project Escape Chicago Winter, Part 2 is officially underway. Pam and I started the tradition last year with our February trip to New Zealand, and are continuing it in 2014 with a trip to the Middle East. Timing couldn't be better, given the massive dump of snow and sub-zero temperatures in Chicago right now. We started the trip in Cincinnati after a New Years Eve wedding. We were up by 7am on New Years day and headed back to Chicago. We were home just long enough to pack and then headed to the airport to meet two of our friends, Sean and Lara, at O'hare. Sean and Lara got married this past August and Lara grew up in Qatar, so when we heard they were planning this trip, we jumped at the opportunity to join them. We spent the first two hours of the trip sitting in the plane while the ground crew had some issue loading cargo. Eventually we got underway and had a relatively uneventful flight to Amsterdam. In Amsterdam, we were told that we were going to miss our connection to Doha and that we should go to the counter to re-book. We decided to ignore the warning and ended up sprinting through the Amsterdam airport and making our flight, though our bags ended up not making it onto our plane. After making it to Doha, we had another delay for our flight to Dubai and ended up not making to Dubai and bed until about 3:45am.

Our first day in Dubai started with an awesome hotel breakfast (including bacon -- I couldn't believe they had it) and walk around the Dubai marina. Everything in Dubai feels (and is) brand new. It is unbelievable how many skyscrapers have been built in the last couple decades. This image gives a decent feel for it: 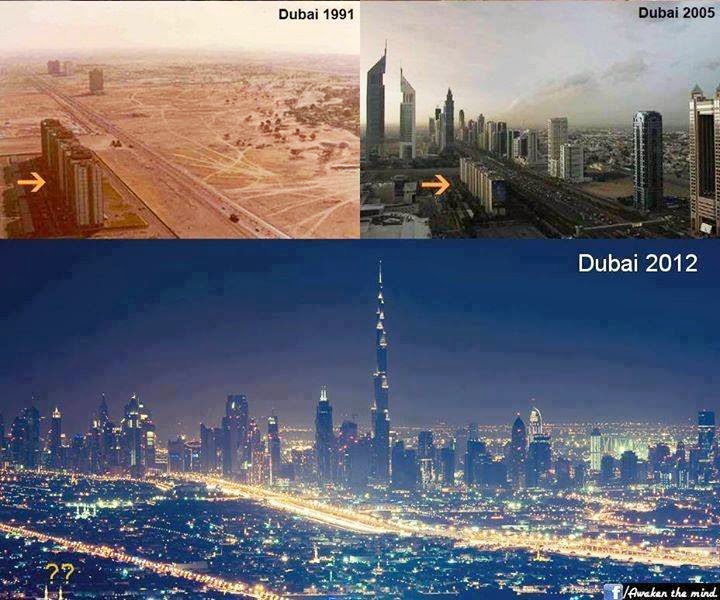 After walking around the marina, we went to one of Dubai's famous malls to pick up some essentials, since our bags were still in Amsterdam. The mall felt extremely familiar, even more so than other foreign malls in westernized countries. A huge percentage of the stores are American or western chains & brands. If the signs didn't also contain Arabic, you could easily convince me I was in an American mall.

One of Lara's childhood friends, Jamil, picked us up from the mall and we drove onto and around The Palm (a manmade island off the coast of Dubai). After that, we went to The Dubai Mall (one of the largest malls in the world) to pick up our tickets to the Burj Khalifa for the next day, and then ate a late lunch. Once again, I was surprised by the number of American/western chains. We agreed to get a more authentic Middle Eastern meal, but almost had to go in search of a non-western chain. Texas Roadhouse, PF Changs, Red Lobster, just to name a few.

We ended up at a Lebanese restaurant near the base of the Burj Khalifa. After, we argued for a solid 5-10 minutes over who would be paying for it, which is apparently commonplace in the Arab world. I've never encountered a group of people who feel so strongly about their hospitality and treating their guests. We then watched a fountain/water show similar to, but larger than, that of the Bellagio. After a pit stop at the hotel, we went to the Burj Al Arab for drinks. The Burj Al Arab bills itself as the only 7 star hotel in the world and is accordingly opulent inside. We tried to visit earlier in the day, but they require a room or restaurant reservation in order to enter the grounds. After heading home, we decided to test out fast food delivery, and had Burger King deliver a late night snack to the hotel before finally getting to bed around 3am.

The next morning, we had a 6:30am wakeup in order to make our 7:30am reservation to go to the top of the Burj Khalifa (the tallest building in the world, designed by Chicago firm Skidmore Owings & Merrill). Views from the top were incredible, and we were surprised at how much undeveloped land there still is in the surrounding area. I imagine that in a few years, that will no longer be the case.

So far, a couple things about the trip have stuck out to me. First, is the palpable feeling of cognitive dissonance. We're supposed to avoid any PDA, but we'll walk by a Victoria's Secret with lingerie openly displayed in the window. Or you think about the amount of anti-American/anti-west sentiment that comes out of the region, but western cars, clothes, and food are very popular among the locals. It's a little bit hard to describe and not necessarily a bad thing, but it can be difficult to reconcile mentally. I think a large part of it comes from the absurd speed at which the region is developing, and some areas have not yet caught up to others. The second recurring theme that I've noticed is the friendliness and hospitality of the people here. American media seems to focus only on the negative sentiments coming out of the region, but all of our interactions have been overwhelmingly positive, both connections through Lara and strangers on the street or in stores/restaurants. We haven't encountered a single rude person thus far.
Tweet
comments powered by Disqus